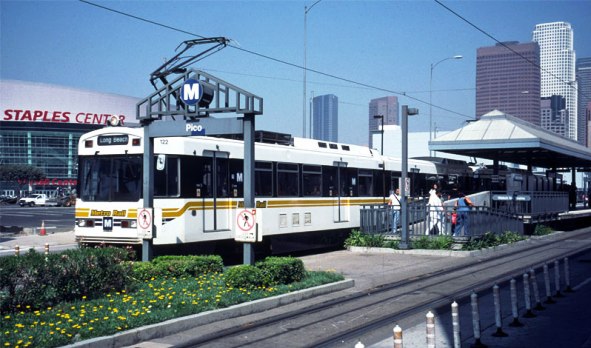 The MTA is planning on building a train route, this year, to run along the long abandoned rail line on Exposition Boulevard from Downtown to Santa Monica.  Rather than build the train below grade (such as in a trench), they are building it at grade (at the same level as pedestrians and motorists).  This is the same way they built the Blue line which has already earned the title, “the deadiest train in America.”

This proposed Expo line will send a train every 2.5 minutes though USC Homecoming Day pedestrians, through Coliseum event traffic gridlock, and within 50 feet schools with children crossing (at Dorsey)s at a rate of 105 students per minute.

Gloria Jeff submitted a memo on behalf of the City of Los Angeles Department of Transportation protesting that the MTA’s safety estimates for crossings at Exposition Park ignored the massive increases in pedestrian and automobile traffic during Coliseum events.  She was fired the next day.

The MTA’s solution for handing the 3:00 pm rush of student crossings is to create a “holding pen” for our children, until the train passes.  Several concerned citizens, myself included, immediately observed that if a collision where to occur, everyone standing in one of these “pens” would be directly in the path of a derailed train.

The Expo line will kill people, and unlike the Blue line (“the deadliest train in America”), it will kill en mass.

A train at grade must sound it’s horn 100 yards before it enters every intersection.  That is 240 horn blasts per day.  Travel along the existing Blue line, and you will see “for rent” and “for sale” signs on homes all along its route.

This train will undoubtedly relieve east-west traffic on the 10 freeway.  However, as proposed, it will simultaneously exacerbate commuter gridlock on all north-south streets between Downtown and Santa Monica.

A train running below grade (in a trench), requires no horn blasts, no “holding pens,” no need for sound walls (graffitti magnets), no crossing gates and no need to slow the train down for intersections.  In fact, a below grade train would operate so efficiently, that its total cost to build and operate would be less than the current “at grade” plan.

Now, here is the really annoying news.  The MTA had originally intended to build the Expo route below grade, and they would have qualified for massive federal subsidies, but they changed the plan.  When asked why they would do this, a Federal Transit Administration official called the MTA, “Unsophisticated.” Even though a below grade project would have a lower total cost (construction plus operating costs), the “at grade” plan was cheaper and easier to build (which ignores its higher cost to operate).  There is no free lunch.  Someone always pays, and entire communities will pay for it with reduced home values, increased noise pollution, snarled traffic and avodable deaths.

Please help us convince them to pursue a safer and more economical solution. Please take a minute to visit http://www.fixexpo.org/ and to sign the petition at http://www.PetitionOnline.com/EXPO/petition.html .

This entry was posted on Friday, October 19th, 2007 at 8:07 pm and is filed under economic forecasts, features, legal & regulatory. You can follow any responses to this entry through the RSS 2.0 feed.