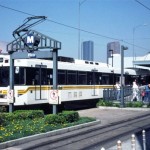 The MTA is planning on building a train route, this year, to run along the long abandoned rail line on Exposition Boulevard from Downtown to Santa Monica.  Rather than build the train below grade (such as in a trench), they are building it at grade (at the same level as pedestrians and motorists).  This is […]

The recent headline news regarding the mortgage industry will have a widespread effect on home values and the availability of credit.  Home foreclosures are projected to exceed $100 billion over the next six years (MSN March), and during the first ninety days of 2007, suddenly and unexpectedly thirty-six of the largest mortgage companies in the […]

By Greg Ip From The Wall Street Journal Online What started out as a pause in rate increases last month began to look more like a full halt yesterday. The Federal Reserve left its short-term interest rate target at 5.25% for a second consecutive meeting. It also warned that it remains concerned about inflation, and […]

By Maura Webber Sadovi From The Wall Street Journal Online Phoenix’s rapidly cooling housing market hasn’t damped the region’s commercial real-estate market. From a new football stadium for the Arizona Cardinals with a design inspired by a desert cactus to more than 16 million square feet of offices, warehouses and retail stores slated to be […]

What About the ‘R’ Word?

January 16, 2006 By Edward Leamer UCLA Anderson Forecast (Commentary published in the Los Angeles Business Journal)         In recessions we have negative economic growth, and in recoveries we rack up pluses. But overall, the U.S. economy since 1970 has grown an average of a little more than 3 percent a […]