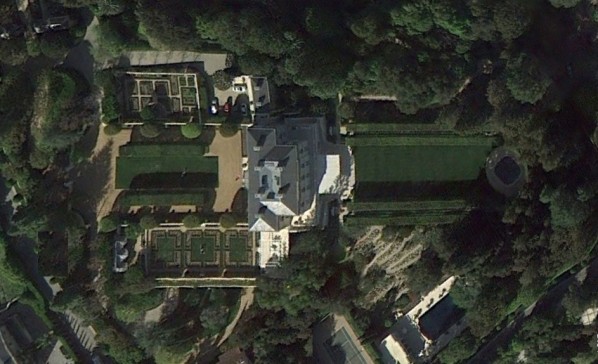 This notable home is best known as the Beverly Hills residence of television’s “Beverly Hillbillies.” It was also featured prominently in the Jerry Lewis film “Cinderfella” and in the Fatboys’ comedy “The Disorderlies.”

I took a tour of the house in 1986 or 1987, and most remember the tunnel under the southfacing lawn, the cube shaped green marble bath with french doors and Juliet balconies overlooking a masterful view of Los Angeles.

It was designed by architect Sumner Spaulding, and the site was purchased by Lynn Atkinson in 1933 and completed in 1938. It is 21,500 Sq ft. It has two stories in the front and three from the back. The lowest floor was a ballroom with a massive terrace overlooking the city.

The house was named for its second owner, a hotelier named Kirkeby. Occidental Petroluem is headquarted in a nearby Westwood office building bearing his name.

The legend surrounding the house is that an engineer built it as a surprise birthday gift for his wife. Upon seeing the house for the first time, still unaware that it was her gift, she said something to the effect of, “Who would live in something this ostentatious?”

Fittingly, the home is now the residence of a billionaire television executive, Jerry Perenchio and has undergone extensive remodeling since its purchase in 1987. The most obvious change is that the new owner has relocated the driveway entrance to Nimes Road, thereby obscuring a view of the house from the front gate. The celebrity of this house has made it a magnate for tourists.

This entry was posted on Wednesday, November 16th, 2011 at 6:51 am and is filed under notable homes. You can follow any responses to this entry through the RSS 2.0 feed.